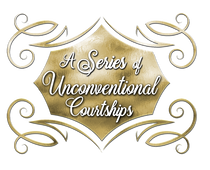 ​He took a closer grip on the rope and leaned even more heavily against it, trying to pull his second foot out without digging the first one back in.  It took longer, with more strain and more wiggling, but eventually, it popped out too.
“That’s both, then?” she asked as he flailed and fought not to go under.
“Yes. Can your mount back further up and pull me out?”
“Of course.”
He let the horse and the rope do most of the work until he drew close to the bank and the bottom firmed up.  Clambering out, he bent over his boots, scraping mud away and assessing the damage.  It was bad, but salvageable.  A good cleaning with water and vinegar, a couple of days to dry and a thorough oiling with his special mix of tallow and neat’s foot oil should do the trick.
And then he looked up—and forgot about his boots entirely.
“Thank you . . .” He’d already begun, but the words faded and stalled.  “How old are you?” he asked suddenly, instead.  She looked like a girl—an uncommonly pretty girl with fiery coloring.
“Nineteen years, nearly twenty,” she replied as she untied the rope from her pommel and began to coil it up again.  She gave him a sharp look.  “How old are you?”
Not the polite answer, but the one he deserved, no doubt.  “Six and twenty,” he answered absently.  “You are terrifyingly competent,” he said as she tugged at the rope, waiting for him to release it.
More than uncommonly pretty, he thought, as he worked to free himself.  And yes, that was the right word to pull from his mental dictionary, as she had worded it.  For her looks were not in the common way at all.  Her eyes were deeply set and slightly slanted and just the dark, amber color of good, old French cognac.  His glance bounced between her other attention-catching features--wide cheekbones and a pointed chin and rich, auburn hair curling beneath a military styled hat.
“Forgive me,” he said, shaking his head in an attempt to clear it.  “My manners are inexcusable.  But seeing as there is no one to make the introductions and given the bizarre nature of our situation, perhaps you will forgive me.” He sketched a bow.  “I am Colm Newland, Viscount Keswick.”
“Ah, yes,” she said with a faint twist of a grin in his direction.  She turned to fold back the long edge of her skirt and tuck the rope into an oddly shaped and positioned saddlebag.  “I recognize your name.  I heard—”
“That I am a rakehell?” he interrupted bitterly.  “A dangerous flirt?  To be avoided at all costs?”  Usually it was a relief when his reputation preceded him.  It saved him from having to do something to establish it again.  But this time—he felt a surprising stab of disappointment.
“I heard,” she said deliberately, “that you were coming early to stay at Greystone Park before the house party.”
“Oh.” He pushed back a surge of embarrassment.  “I apologize. My manners are truly atrocious today.”
She shrugged.  “Easily forgiven—if you will but promise to do the same for me.  I am forever saying the wrong thing or asking the wrong question, so your turn to be gracious will undoubtedly come soon enough.”
“You are very kind, Miss . . .?”
“Lady,” she corrected.  “Lady Glory Brightley.”
“Ah, sister to Tensford’s new wife, then?”
She nodded.
“I’m astonished that they’ve let you go out riding on your own,” he remarked. “Grateful, but astonished. Is that the usual thing for young ladies, these days?”
Her generous, pink lips tightened.  “No.  It is not.”
“Well, then, I must be thankful that you are an unusual young lady.  And may I add that I am also grateful for your unusual mare?  That was a fine trick, and she’s a beauty, besides.”
The girl’s manner thawed instantly.  “Isn’t she?”  She stroked the high arch of the mare’s neck and her whole face softened into a warm expression of affection that made her look utterly . . . likeable.  And like he wanted her to look at him in such a way. “Poppy is a wonderful friend.  She has many useful skills.”
“All of which must have taken a good deal of patient training, if they are of a similar nature.  I commend you.”
“All gallantries must be given to her.  Poppy is willing and eager, which makes everything easier.”
“Then you are as lucky in your friend, as I am in my new acquaintance.”
“Don’t.” She’d stiffened up again, sat back and gathered up her reins.  “Please.”
“Don’t . . . what?” he asked, perplexed.
“That. Whatever it is that you do . . . that you are known for.  Dangerous flirtation?  Is that what you called it?  I’m not that sort of girl.”
He stilled, suddenly wild with curiosity—and when was the last time anything had made him feel that way?  “What sort of girl are you, then?”
“The sort who is leaving.”  The mare spun around and Lady Glory looked back over her shoulder. “You’ll find your mount tethered on the path to Greystone.”  She gestured with her chin.  “Just that way, and past the edge of the field.”
“Wait, you will not return to Greystone with me?”
“No.” She didn’t offer further explanation, just set off, leaving the bog behind and heading up the edge of the field, away from his destination.  “Good luck with your boots,” she called. 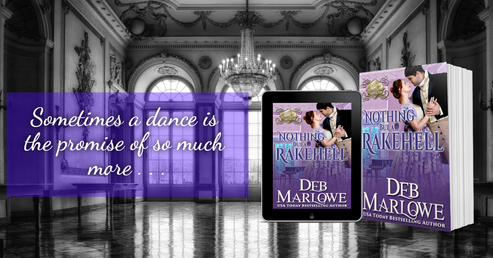 A tale of coming of age, second chances, secrets, disability, finding an inner strength to reach for your desires, running from your demons and learning to face your demons. Fantastic read!!
--April from My Book Addiction and More

I loved this book. The passion built beautifully between the our hero and heroine, their friendship was first and slowly deeper feelings layered itself over that.
​              --​LyssaReviews