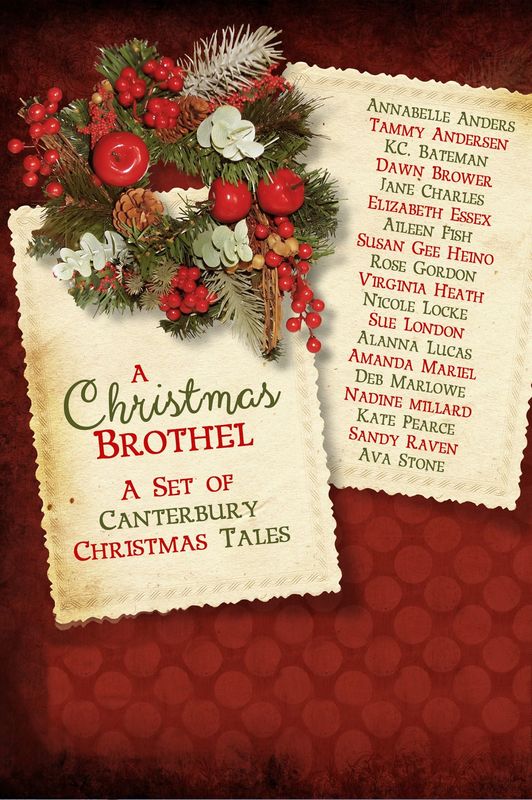 A special, limited edition story, available from November 23 to January 6 only!
​
100 % of Author Royalties will be donated to Toys for Tots.
A Christmas Brothel is made up of many short tales told in the tradition of Canterbury Tales.  My story is The First Taffy Maker to the King.  Read on for an excerpt!
“We met at Christmas. Our first, flushed feelings of infatuation are tangled up in the scent of evergreens, the taste of cinnamon and the heady waft of spirits from a brandy-soaked pudding.”

The audience before him sighed. Gareth was perched in the kitchen, at the end of the long, scarred oak table. Frau Klaus, now dressed grandly in a green gown set off with a green and gold silk turban, fluttered about the kitchen, putting thin, ginger biscuits on platters. The kitchen assistants, several of the house girls, the maids and the boot boy were all gathered, sneaking tidbits and listening to his story.

“The second time we met, she came into my tea shop.”

“No fool, that one,” Bríet, the Nordic-looking girl, said.

“I’d ‘ave sought ‘im out, too,” the maid at her elbow whispered.

“I was thrilled to see her again, to have another chance to get to know her,” Gareth admitted. “I held nothing back. I wooed her with my most fragrant teas and attentive services—and then I brought out the big guns.”

“Yes, you did!” a footman cheered.

“I seduced her senses with the richest Welsh tea I could concoct—with creamy Glamorgan sausages and crempogs sizzling straight from the pan. With rich, currant-studded bara brith and rarebit with the sharpest, most flavorful cheese sauce.”
​
“I don’t know what even one o’ those be,” a girl sighed, “but I know I want to try it all.”