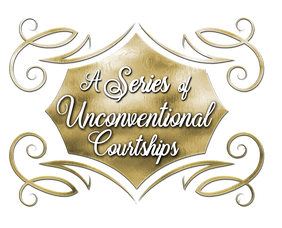 “Let’s give them a bit of privacy,” she whispered as she drew close.  He stared down at her until she nudged him.  “Mr. Sterne?  Can we take a stroll in the passage outside, perhaps?”

“What?  Oh, yes.”  He glanced toward Tensford, who was leaning perilously close to his wife, and wrenched the door open.  Closing it in a gentler fashion, he offered Miss Monroe his arm and steered her away from the stairwell and towards the tall window at the end of the corridor.

The view was of the street below.  He peered down.  “Has the carriage arrived?  We left it behind when it was blocked by an accident in the street.  There was no keeping Tensford inside, sitting still.”

He glanced over and saw she was staring at him, rather than the view.
He turned to face her.  For a moment, as the street noise faded and the homely sounds of Mrs. Lewis sweeping the downstairs entry hall disappeared, they were alone together, caught in a bubble of perfect of awareness.
He couldn’t stop looking at her mouth.  That smaller top lip, out of balance, but perched so perfectly on the lower, plumper lip . . . if he kissed just the top, felt that petal softness, caressed it with his own mouth . . . would it swell a little?  Make a more even pairing?

“Do you know,” she said absently.  “I think if I had a right-angle square, I could use your nose as the hypotenuse of a triangle.”

“Splendid,” she interrupted, her gaze still focused intently.  “It is straight and strong and rather . . . perfect.”  She blinked suddenly and her gaze darted away.  “For your face, I meant, of course. Wonderfully proportionate.”
​
“Thank you.  I think.”

Her eyes widened and she took a step back.  “Oh, I do apologize.”  Her shoulders slumped a little.  “My first day in Town and I’ve done it already.”

“What my mother warned me I must not.  I have a habit of going off inside my head at times, usually when I’m making a discovery, connecting things for the first time, or obsessing over something.”  She ducked her head.  “I daresay you don’t know what I mean.”

“I do, though.”  He stared at her mouth again as her head rose slowly.

“I tend to just blurt out what I’m thinking, when I get in such a state,” she said on nearly a whisper.  “My mother swears it will get me in trouble in Society.”

He should stop.  Stop staring.  Stop noting the increased shallowness of her breathing.  Stop wanting a girl who was not meant for him.  “Perhaps, then, we should focus our thoughts away from noses and lips and—”

He froze.  Devil take it.

“Lips?” she asked.  Then she flushed a glorious, rosy red and turned away, her fingers rising to lightly touch her mouth.

He nearly shook his head at his own inept blunder.
​
He didn’t, though.  He reached for her and kissed her, instead. 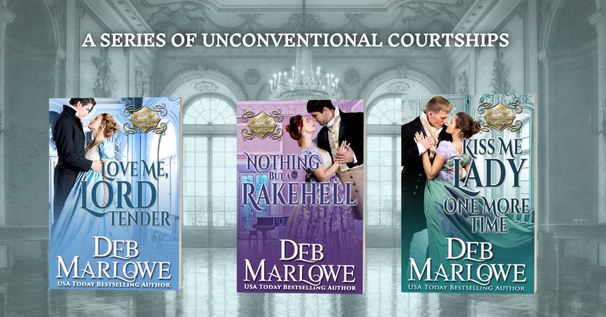