A Compilation of Fun or Interesting Historical Facts!

November 1 was the end of the year in the druidic calendar, and the night before, or All Hallow's Eve had several traditions associated with it.

One old world custom was to let your fire go out on Halloween and start a fresh fire from the village bonfire, symbolizing a fresh start to a new year.

In the old cultures, the veil between the living world and the dead grew thin on All Hallow’s Eve, allowing the dead to walk in our world.  People would leave out offerings of food or sweets to distract or appease the dead and convince them to pass them by.  Old Celtic traditions of the Samhain holiday were carried on- especially activities that could foretell marriage or death--such as apple bobbing and scrying in water or mirrors.  Fires and torches and smoke were thought to carry the protection of the sun and have cleansing properties. 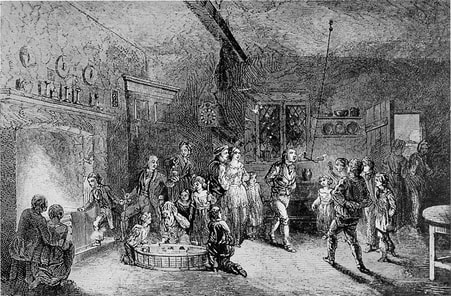 Guising, or going house to house in costume or disguise, began around the 16th century.  In some places, the disguise was thought to protect you from the dead as they would think you one of them.  In others, such as Wales and Scotland, youths would go to houses reciting verses or expecting a welcome.  Feeding or welcoming them would bring good fortune, failing to do so would end in misfortune.  Masquerading as spirits also led to mischief and pranks.

Pumpkins were not common in England, Scotland or Ireland, but people did carve lanterns from turnips and beets to scare the dead away.  I decided to give it a try, and now I understand why the faces they carved were often crude.  It's a lot easier to carve a pumpkin! 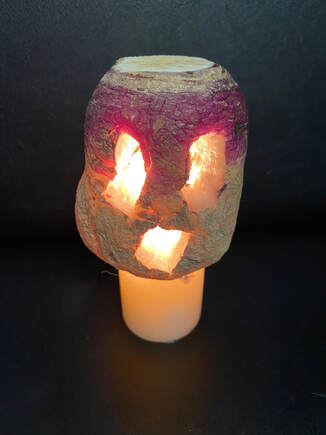 Did you know that in the North of England, Halloween was sometimes known as Nut-Crack night?  A couple would put two nuts by the fire and if they burned quietly together, their fate was a happy one, together.  If the nuts jumped apart,  the relationship was fated for separation. 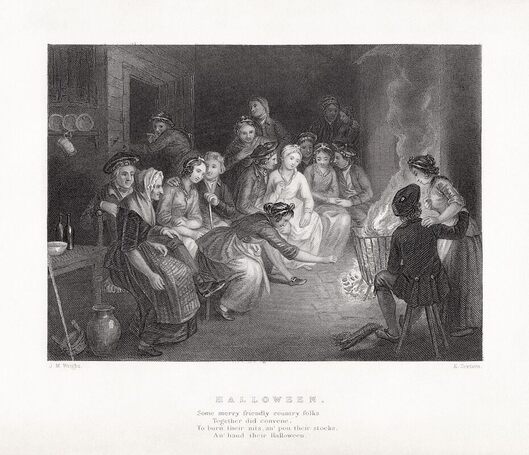 A term used in clubs like White' Club, in the Regency.  White's, especially, was very exclusive and difficult to join.  When a new member was proposed, they held a secret ballot.  Members voted with a white ball placed in a bag--yes, he may join.  Or a black ball--no, he may not.  Even one black ball in the bag meant that the proposed member would be excluded.

Here's a pic of the outside of White's Club on St. James's Street, as it looks today.  This is the famous bow window where Beau Brummel famously sat and passed judgement on those passing in the street. 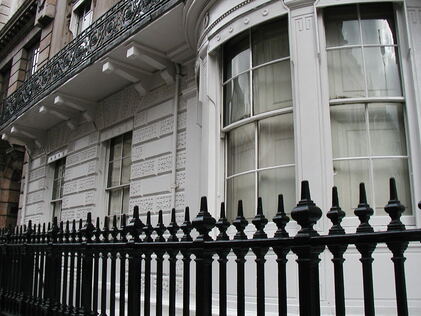 Beeswax candles were the brightest, but the most expensive, in the Regency. Tallow candles were cheaper, but they did leave a smell and they had to be trimmed several times an hour. This is a candle wick trimmer, it has a box attached to catch the wicks for later disposal. 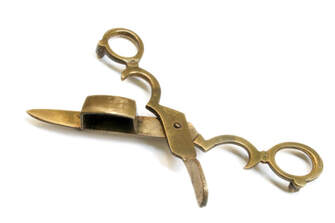 Chapbooks were inexpensive, paperbound, short publications, meant for the lower classes.  They came into popularity soon after the birth of the printing press and remained popular until the middle of the 19th century.

They covered a wide range of subjects.  They were meant to entertain, inform and instruct.  Vehicles of popular culture, they included children’s literature, popular ballads, histories, folk tales, poetry, religion and politics. They were sometimes illustrated, but often with crude, blocked woodcuts that were reused in many different stories.  Others were more finely illustrated, with colors added and a thicker, colored cover.  These editions were more expensive and meant to appeal to the more affluent audience.

Sold for a few pence, millions of chapbooks were printed.  Few survive, however, because the pages were often reused as they wore out.  They were sold by the printers who created them, by other shopkeepers and by chapmen, who traveled through the country, going to festivals, fairs and even door to door.

The story of Jack and the Giant Killer was a popular example, and I used this one in my next Castle Keyvnor Pixie story.  The heroine is a bookseller and is inspired by the story to tell a tall tale about Cornish giants herself.  :-) 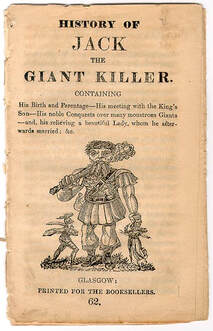 A bit of a story behind some Regency Slang: a woman who was loud or crass or bad tempered was sometimes referred to as having 'the mouth of a Billingsgate Fishwife'

Why? A fishwife is any woman who sells fish and the crew at the Billingsgate Market were said to be loud, with foul tempers, sometimes crude and often tough and easy to take offense. It was said that they often smoked pipes, took snuff and drank gin--scandal! :-)

​There are numerous artistic representations of fishwives. This is a cartoon depicting the Prince of Wales, touring Plymouth. His friend was walking ahead, clearing the crowd from his path. He reportedly pushed a fishwife aside in a disrespectful way. She fought back and pushed the friend into the drainage channel in the road--which was likely pretty noxious! The Prince and his other friends were apparently highly entertained. 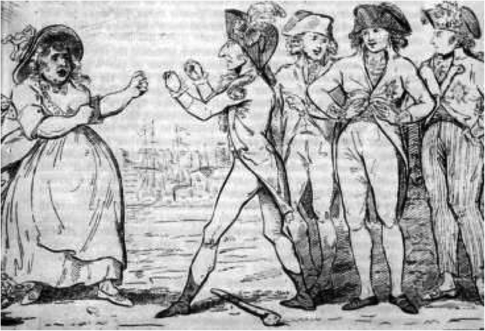 When eighteenth century ladies spent hours and hours and significant money to create those stand-out hair creations, they wanted them to last days, weeks, even months sometimes. You can imagine the hygiene issues. Lice, even mice!, were a problem. So, they had grattoirs, tools with which to scratch their heads without ruining their coiffures. Some were made of ivory, others were topped with gold or silver.

​This is Marie Antoinette, with a style worn to celebrate a French naval victory over the British.

Ice Skating on the Serpentine

In Six Perfect Christmas Moments, my characters get the word early that the Serpentine in Hyde Park has frozen over, and they get a romantic night skate in before everyone in Town discovers the news.

But did they truly ice skate in London during the Regency? Yes, they did! Several times during this period, it was cold enough in London to freeze the lakes and ponds in the parks, and Londoners took full advantage. The Serpentine was favored amongst the well born, of course, but it was literally covered in skaters when it froze over, with skaters of all classes and abilitlites. The Picture of London for 1810 states that more than 6000 people were counted on the ice at one time!

Newspapers such as The Morning Post covered the spectacle, reporting the names and skills of certain skaters, and in some cases, what they were wearing. The Persian Ambassador mentions viewing the skating in his papers

There were plenty of accidents, of course, and even people falling through the ice. The Picture of London for 1810 also mentions that his majesty gave a spot of ground on the banks of the Serpentine over to the Humane Society, who set up a small hut where victims could be taken. The society hired men to watch the river and help those who needed it.

My Iris has a small mishap, but fortunately, she has the dashing Lord Mareton on hand to assist her. :-) 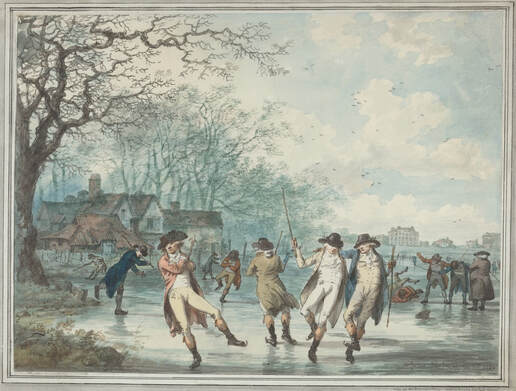 Do you know what a mudlark is? In the Regency they were often children who scavenged along the muddy banks of the Thames, looking for items washed up that they could sell.

​But did you know that there are still mudlarks in London? I follow a couple of them on Twitter, where they post the interesting things they find. One just found a Saxon--a coin from the time of King Alfred! How cool is that! 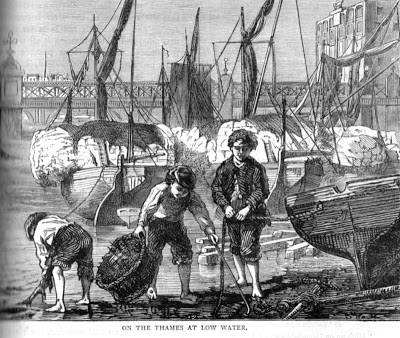