LADY, IT’S COLD OUTSIDE (*mild) - Deb Marlowe
Neither Lord Ellesworth nor Miss Glenna Bolton have much Christmas spirit this year. Neither have much desire to travel during the season, either, but a Star in the East, an abandoned child and a quest for holiday cheer might just convince these two that love is the best gift of the Season.

ONCE UPON A MIDNIGHT CLEAR(**medium) - Ava Stone
Only a duke will do for Lady Ivy Dallimore. If her unhappily married sisters have taught her anything, it’s that love is fleeting but a title lasts forever, which is all well and good in theory until she finds herself falling for the scandalous third son of a marquess who is bound and determined to make his fortune in trade!
THE VISCOUNT’S TEMPTING MINX (*mild) - Erica Ridley
He's an unbendable lord. She's an unstoppable force. When these two clash, their winter nights will never be the same!
THE CHRISTMAS CONQUEST (***hot) - Claire Delacroix
Love was not part of the plan when this marriage was arranged… Can a matchmaking courtesan in disguise save this match before the new year dawns?
A WINTER WISH (*mild) - Nadine Millard
Mariah Bolton is as headstrong as she is clever, as strong-willed as she is beautiful. She enjoys her life and, apart from a rather snobbish mama, she is happy with her lot. Imagine her consternation then when her world is turned upside down by the brooding and aloof Mr. Brandon Haverton!
LYING BENEATH THE MISTLETOE (***hot) - Sadie Bosque
Matilda needs a miracle. She left Henry, her first and only love, over a decade ago. Now she’s back and determined to piece his heart back together. But she only has one night to do it.
A VERY MERRY VISCOUNT (*mild) - Jane Charles
The thought of spending Christmas at Danby Castle with her matchmaking great-uncle fills Lady Tabitha Storm’s heart with dread, until she spies the handsome horseman from Hyde Park. Would Andrew Delaney, Viscount Straffan, receive more this holiday than he ever dreamed, or would his Irish heritage stand in his way?
THE LADY’S GUIDE TO A HIGHLANDER’S HEART (***hot) - Emmanuelle de Maupassant
Meet a young bride in disguise and a battle-hardened Highland warrior in this passionate 'enemies to lovers' medieval romance.
MASKED LOVE (*mild) - Nicole Zoltack
An evening of enchantment has a maid wishing a lord might look past his station this Christmas season.
THE MISTLETOE TEMPTATION (***hot) - Eve Pendle
She deliberately steps on his toes to avoid marriage and he retaliates by proposing a fake engagement. A Regency enemies to friends to lovers romance, with a touch of brother’s best friend, and a whole lot of banter and steamy scenes.

A SNOWLIT CHRISTMAS KISS (**medium) - Larissa Lyons
When a mischievous feline nudges two lonely souls together on a wretched, snowy night, a few Christmas kisses might be all they need. But he’s engaged, and she’s decided to never marry, so in the morning they go their separate ways, leaving pieces of their hearts behind...until a Twelfth Night Ball brings misunderstandings to light and merry tidings to one and all.

A DUKE FOR MIDWINTER (*mild) - Anthea Lawson
​After a gentleman rescues her from a winter storm, Miss Selene Banning finds herself snowbound with Sir Jared Kendrick, who is not precisely who he claims to be… 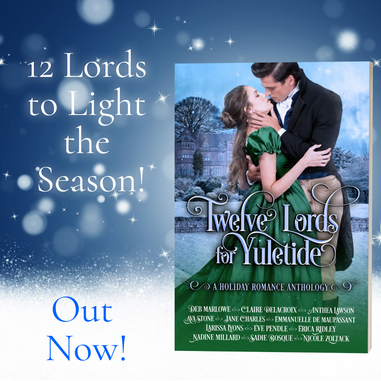