Christmas in the Regency

I get a lot of questions about Christmas traditions in the Regency, so I thought I would work up an article about it.   If you have a question I haven’t answered here, shoot me an email at Deb@DebMarlowe.com and we’ll see if we can figure it out!  :-)

I love to decorate my tree with historic themed decorations and people ask if there were Christmas trees in the Regency period.  The answer is both yes and no.   It was not an English custom, but one of the German states.  Queen Charlotte, hailing from the German duchy of Mecklenburg-Strelitz, reputedly introduced the custom.  John Watkins describes the Royal Christmas celebrations in his biography of the queen, including this bit about the year 1800.

Sixty poor families had a substantial dinner given them; and in the evening the children of the principal families in the neighbourhood were invited to an entertainment at the Lodge. Here, among other amusing objects for the gratification of the juvenile visitors, in the middle of the room stood an immense tub with a yew-tree placed in it, from the branches of which hung bunches of sweetmeats, almonds, and raisins, in papers, fruits, and toys, most tastefully arranged, and the whole illuminated by small wax candles. After the company had walked round and admired the tree, each child obtained a portion of the sweets which it bore, together with a toy, and then all returned home quite delighted.

Outside of the Royal family, mention of Christmas trees was rare for a long while after that, but apparently they did exist, mainly showing up in the homes of people who were exposed to them at court, as was reported of the Duke of Portland in 1807, or who themselves were of Germanic descent.

Another instance was at the Cowpers’ estate Panshanger, in Hertfordshire.  Charles Greville was there in 1829, and wrote about it.

“On Christmas Day the Princess [Lieven] got up a little fête such as is customary all over Germany. Three trees in great pots were put upon a long table covered with pink linen; each tree was illuminated with three circular tiers of coloured wax candles – blue, green, red, and white. Before each tree was displayed a quantity of toys, gloves, pocket-handkerchiefs, workboxes, books, and various articles – presents made to the owner of the tree. It was very pretty. Here it was only for the children; in Germany the custom extends to persons of all ages.”

The young Princess Victoria wrote of Christmas trees set up by her mother, the Duchess of Kent, also known as the Princess Victoria of Saxe-Coburg-Saalfeld.  But it wasn’t until 1848, when the Illustrated London News printed a scene of Queen Victoria, Prince Albert and their children gathered around a tree that the Christmas tree became fashionable and more widespread. 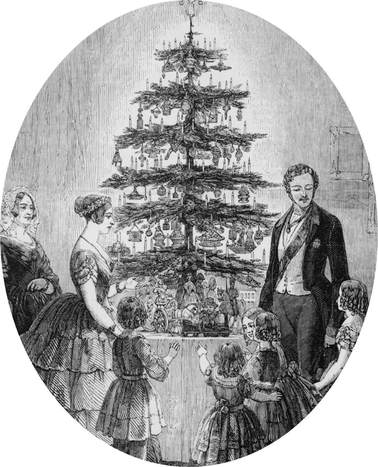 ​More widespread in the actual Regency period was the decorating of the house with greenery—and the traditional greens were rosemary, bay, holly, laurel, and mistletoe.  Many believed that it was bad luck to decorate before Christmas Eve (someone tell our American stores!).  Kissing –or declaring a truce—under the mistletoe was a tradition that dates back to medieval times and it was often fashioned into a Kissing Bough that hung in a prominent spot.  Often, the berries were plucked from the mistletoe with each kiss, and when the berries were gone, the kissing was over.  :-) 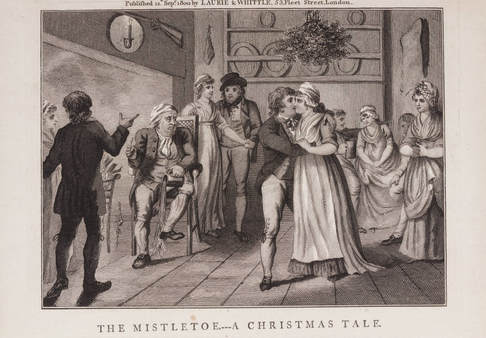 ​Christmas activities were subdued in the Regency Period.   Church services and dinners with family and friends were enjoyed.  Charity was important to many people at this time of year.  Wassailing was a tradition in which carolers would travel from house to house, hoping for a drink from the Wassail bowl, a bit of food or even money. Wassail comes from the old Anglo-Saxon phrase ‘waes hael’ which meant ‘good health.’ ​ 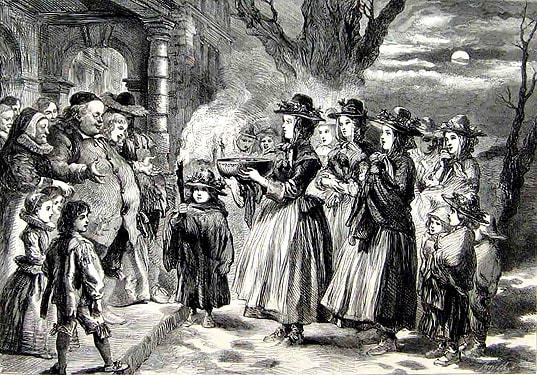 It was also common in parts of England to go wassailing amongst the fruit trees.  Singers would go out to the orchards and sing to the trees, awakening them, letting them know that the seasons were turning and spring was on the way. It was meant to increase the harvest in the following autumn.   In some parts, they would also hang a piece of toast soaked in beer in a tree, to give thanks for a good crop of apples.  There are places in the UK today where the tradition still lives on.  ​ 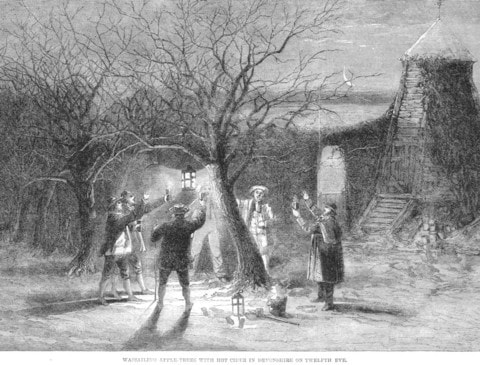 The children played nursery games—notably Snap Dragon—a doozy of a game which would never fly today!  A large bowl of brandy and raisins would be brought out in a shallow bowl.  Lights were snuffed and the brandy lit on fire.  The kids would have to try and grab a raisin out of the bowl and eat it quickly, without getting burned.  Not something we would do today, with our kids! 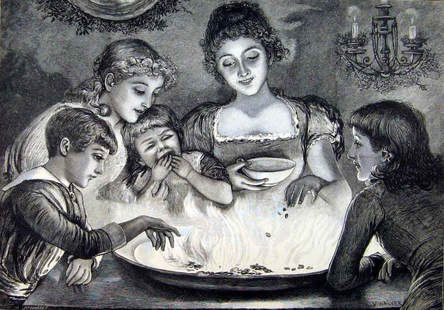 ​There were traditional foods for the Christmas feast.  A boar’s head was a special treat, or the main dish might be a turkey or a goose.  Special sides were plum pudding—which took weeks to make—gingerbread, and syllabub—a thick drink made of spiced ale or cider and cream. 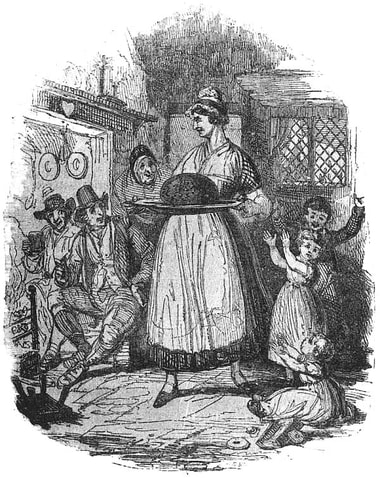 More to come:  Watch for articles on the Twelve Days of Christmas, Epiphany and Cornish Christmas traditions and how they were different!