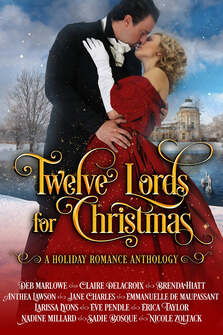 ​From sexy earls to holiday ghosts, second chances to false engagements, find your Christmas cheer in these twelve sweet-to-spicy historical romance tales from bestselling and award-winning authors! The lord you’ve been looking for might be just a page-turn away…
A CUP OF CHEER – Deb Marlowe
The Earl of Chester’s wild ways nearly cause a disaster and set him to reevaluating his lifestyle. Paired up with his grandmother’s companion and charged with bringing Christmas to a lonely house, will he come to believe in himself—and love?
THE MISTLETOE TRAP – Eve Pendle
A spicy-hot story of a heroine with a flair for enterprising embroidery and a botanist single father hero. Can a scandal that compromises Amelia’s reputation give their love a second chance?
A MOST INCONVENIENT EARL – Claire Delacroix
When Eurydice Goodenham unexpectedly proposes a marriage of convenience to Sebastian Montgomery, Earl of Rockmorton, the notorious rake is intrigued. Sebastian soon realizes that the unpredictable Eurydice is the perfect match for him – but can he convince his skeptical bride to take a chance on love?
THE LADY’S GUIDE TO MISTLETOE AND MAYHEM – Emmanuelle de Maupassant
On the run until she receives her inheritance, Ursula takes on the identity of an etiquette teacher and heads to Castle Dunrannoch to whip her ‘young charge’ into shape. But the long-lost heir is a whole lot more than she’s bargained for!
A COUNTESS FOR CHRISTMAS – Anthea Lawson
Miss Cecilia Fairfax dreads the upcoming holidays, especially when her brother brings home an unexpected guest. But of all the blessings of the season, sometimes the most unexpected is love.
MISS ISABELLA THAWS A FROSTY LORD – Larissa Lyons
Mistletoe kisses grant a blind heroine and a frosty hero a chance at happiness during a winter house party.
HER ACCIDENTAL GROOM – Nadine Millard
Lady Natalia Soronsky and Lord Benjamin Strafford started out as enemies and ended up as co-conspirators in a faux betrothal. But the longer they continue the ruse, the more they start to wonder just how false their feelings are.
CHRISTMAS SPIRITS – Jane Charles
When Benjamin Storm, Earl of Kenley, is sent to Scotland to procure a missing whisky shipment, he encounters the most unusual smuggler.
JOY TO THE WORLD – Nicole Zoltack
Unbeknownst to Eliza Berkeley, the man she thought she was going to marry was not Stephen Huntington, the Duke of Wyndale. Will a match formed through deceit blossom into love this Christmas?
TO FALL FOR A DUKE BY CHRISTMAS – Sadie Bosque
A reluctant duke and a charming commoner devise a plan to serve their own needs. A false relationship is supposed to be their salvation… Until love intervenes.
WHAT IF I STILL LOVE YOU – Erica Taylor
After a failed elopement ten years earlier, Henry, Earl of Carrington, and Anna, the widowed Viscountess Rycroft, are reunited at his aunt’s Twelfth Night party. Can this star-crossed pair find their way back to each other?
CHRISTMAS PROMISES – Brenda Hiatt
When Lord Vandover leaves for London, he promises his grandmother he will return with a bride. Unfortunately, with each simpering debutante he meets he regrets that promise more—until he encounters the lovely Miss Holly Paxton. 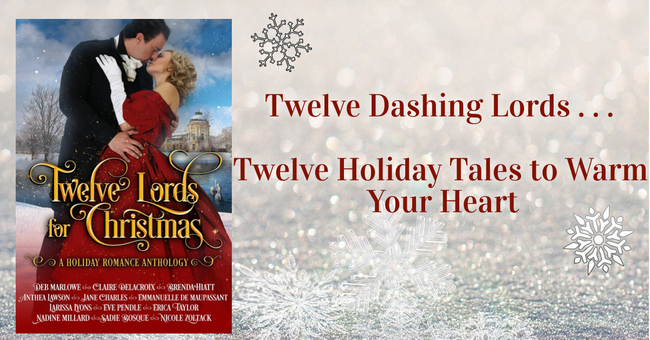 She didn’t know how long she lay there before she realized thickening congestion was making it difficult to breathe, but dawn lit the room when she sat up, reaching for a handkerchief.

She froze.  The soft light illuminated the mixed garland that adorned her mantel.  More greenery circled the candle stick by her bed and draped above her, along her simple headboard.

Oh!  What a lovely surprise!  Her heart melted even as her nose began to run.  Had the earl done this?  She’d seen him watching her closely as they discussed how to bring Christmas to the house.  She blinked her stinging eyes and just as she noticed the heavy amount of fir amongst the garlands above her head, she began to sneeze.

Good heavens.  Eyes watering, she dashed for the window, threw it open, stuck her head out and gulped in the cold, fresh, clean air.  She glanced back, still touched.  It was a lovely surprise, even if her congested head could not appreciate it.

Shivering, she turned back and reached for her dressing gown.  A large sneeze caught her—and then once she started, she couldn’t stop.  Nose streaming, she headed for the door.  It swung open and Susan stood there, aghast.

Wiping her eyes, Julia emerged into the passageway.  A little way down, the dowager countess stepped out, frowning and pushing her nightcap away from her face.  “What’s this?  What’s the commotion?”

A door slammed from further away and the earl came around the corner.

Julia sneezed and frantically wiped at her eyes.  Lord Chester was striding down the corridor, clad only in a pair of tight breeches, with a banyan-type dressing gown unbelted and flowing out behind him.  Her heart stopped, then thumped, thumped, thumped into an unsteady gallop.  Good heavens.  He was . . . He looked . . . She blinked again, furiously, unable to look away, unwilling to miss a moment’s glimpse of broad shoulders or bare, expansive chest.  Her gaze traveled on to his narrow waist and the tight stretch of fabric over muscled thighs--

“What is it?”  He stopped to look at Julia and she hid her running nose behind her kerchief.  “Your eyes are red.  Is it your fire?  Is it smoking?”  He strode past her into the room and she hurriedly blew her nose.

Lord Chester came back out.  He moved close and looked her over.  “Is it the fir?” he asked.

She nodded.  Fighting to keep her eyes on his face, she folded her handkerchief and opened her mouth to answer—and let out instead, an explosive, massive sneeze—all over his bare chest.

Someone let out a long, horrified gasp.  It was Charlie, peering from the stairwell.
​
Why wasn’t the floor opening to swallow her up?