A Killer in the Crystal Palace 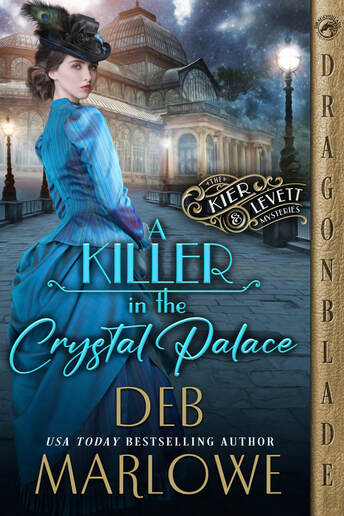 ​A grand showcase for technology, art, design . . . and murder

London, 1851, and the Great Exhibition is on.  A soaring success despite months of dour predictions, it is the event of the year, on front pages and  wagging tongues the world over—and Miss Kara Levett is thrilled to be in the middle of it.  The daughter of a baron and an exhibitor herself, she happily demonstrates her elaborate automatons and case clocks to the crowds.

But her situation grows perilous when a man is murdered in the Crystal Palace and she becomes the prime suspect.  With the unexpected aid of Mr. Niall Kier, a reserved Scottish blacksmith, artist and fellow exhibitioner with secrets of his own, Kara begins the work the Metropolitan Police show no inclination for—finding the true killer.

​Together, Niall and Kara dig up international espionage schemes and sordid family secrets, and chase clues from Victorian high society to the London slums, all while trying to stay ahead of the villains who seek to make her the next victim.

“One thing more,” he said as she bent to run her fingers over the objects in her desk.  “I’ve discovered the name of our one-armed victim.”

She straightened up and stared in his direction.  “What?  You did?  I discovered it, as well.”

They both spoke at once.  “Walter Forrester.”

She could barely see him, but she grinned and knew somehow, that he must be smiling too.

There it was.  A moment of connection that stretched out between them.  And right then, her thinking shifted and she knew.  There was more here than her unusual attraction to a large and masculine male.  Perhaps he would turn out to be the one who could keep up with her.  Perhaps he offered a challenge she hadn’t even known she longed for.

“How did you discover him?” he demanded.

She slipped a couple of pencils into the pouch at her waist.  “I will tell, if you will.”

He raised a brow at her deliberately cheeky tone.  “Very well.  I consulted a society catalogue.”

She frowned.  “I was under the impression that Forrester was minor, country gentry.  Not the sort to be found in Debrett’s.”

“It wasn’t Debrett’s.  More of a walking, talking, insult-slinging sort of reference.”

“I see.”  She was impressed that he was not without his own resources.

“Forrester might not have had blood ties to the beau monde, but the young man had ties of friendship.  Enough to make him known.”  He leaned against the door jamb.  “And you?  How did you discover him?”

“I saw the maker’s mark on the carved wooden arm this morning.”

“You knew it?”  He sounded surprised.

“No, but I have my own curmudgeonly guide to the world of mechanical surgery.”

There it was again.  A longer-than-usual moment of mutual appreciation.

“You did not happen to discover Forrester’s address, did you?” he asked.

“Well, then.”  He straightened.  “I do think we should see you safely away from here.  Allow me that much, at least.”

She nodded.  “Very well, Mr. Kier.  Let us go.”  She reached for a heavy wrap from her wardrobe.  “In fact, I believe I will accept your offer of help.”

“Excellent.”  He sounded altogether satisfied.
​
She let him have his moment of victory.  “Yes.  I think that together, we might just accomplish something.”

5 Stars--The investigation remains the primary story, but the slow-burn, romantic plot simmers nicely. An action scene serves as a satisfying finale. Along the way, we get fun banter and a wonderful cast of secondary characters . . .  I can't wait to see what happens next!
​--Charlottesvillebookworm
4.5 Stars--A first tale that sets the pace, building up the team that will navigate around Kara and Niall, a heroine who needs no one to fight her battles and has the ability to defend herself and a hero with many secrets but unable to step back bewitched by his new partner’s light.
4.5 stars
​--Elodie's Reading Corner