AN UNEXPECTED ENCOUNTER
by Deb Marlowe

Tall, practical girls might not be worth much in a man’s world, but Miss Lisbeth Moreton knows she’s worth more than the squire’s prized heifer.

​To change her fate, she’s run off to a date with destiny at the British Museum. Her would-be swain never shows, but an unexpected encounter with Lord Cotwell and his lonely ward might lead to altogether new prospects . . . and perhaps to love. 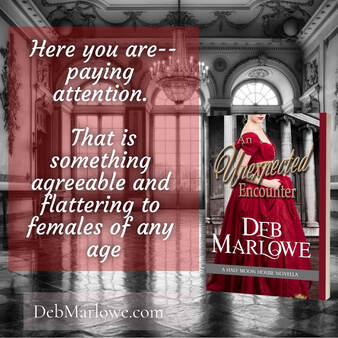 Who would have guessed that Aurelia’s silence would worry him as much as another child’s boisterousness? Or that her one major flaw would be this irritating propensity to slip out of the house and through the streets to the museum? It had to stop. It wasn’t safe. And today he’d had to interrupt the delicate installation of a pneumatic tube to track her down again.

At his side, the well-meaning stranger cleared her throat again. “Excuse me.”

Her voice sounded strained. He suppressed a surge of boredom and annoyance at the thought of another timid matron, frightened by his size. “Thank you for your concern, but I will take charge of my ward from here.” He didn’t bother to look at her as he said it.

Ah, not fear, then, but skepticism. He could better respect that.

“Aurelia, is this man your guardian?”

“Yes. That is, I think so.” And no joy did she find in it, either, judging from her tone.

“Nevertheless, I have a question or two, and I’d feel better asking them if you would kindly put the child down.”

Not timid, then, either. Interest peaking, he turned to address the interfering female.

And slowly lowered Aurelia to the ground, while simultaneously--heroically—keeping his mouth from taking the same journey.

This was no sharp-tongued spinster, no scolding matron. No, nothing so predictable or off-putting.

A young woman stood next to him. Not grandly beautiful at all, but made up of so many disparately pleasing parts that he found he could not tear his gaze away. Her hair was chestnut, thick and just slightly disheveled. Her eyes—the lightest blue, but with a remarkable dark ring around the iris. He might not have been able to turn from them, had her mouth not begged for his attention. No spinster had ever possessed such perfectly plump, full lips, stung pink just now from being pinched in disapproval.

Seconds and lifetimes passed as he stared. Striking, that’s what she was. Not a conventional English beauty, but an object of fascination, nonetheless. Like one of his beloved machines, she was made of tiny, incongruous parts that came together to make a wondrous whole.

He continued to look until all the corners in her face—on her large eyes and past the ripe curves of her mouth—started to turn down. He let his gaze move on, then, to encounter more curves, encased in a sturdy carriage dress of some quality. The wrinkled skirts held testament to recent travel and a portmanteau sat at her feet. His gaze flew up to meet hers once more.
​
Interesting. Yes. Still the right word.
Don't miss the rest of the Half Moon House Series! 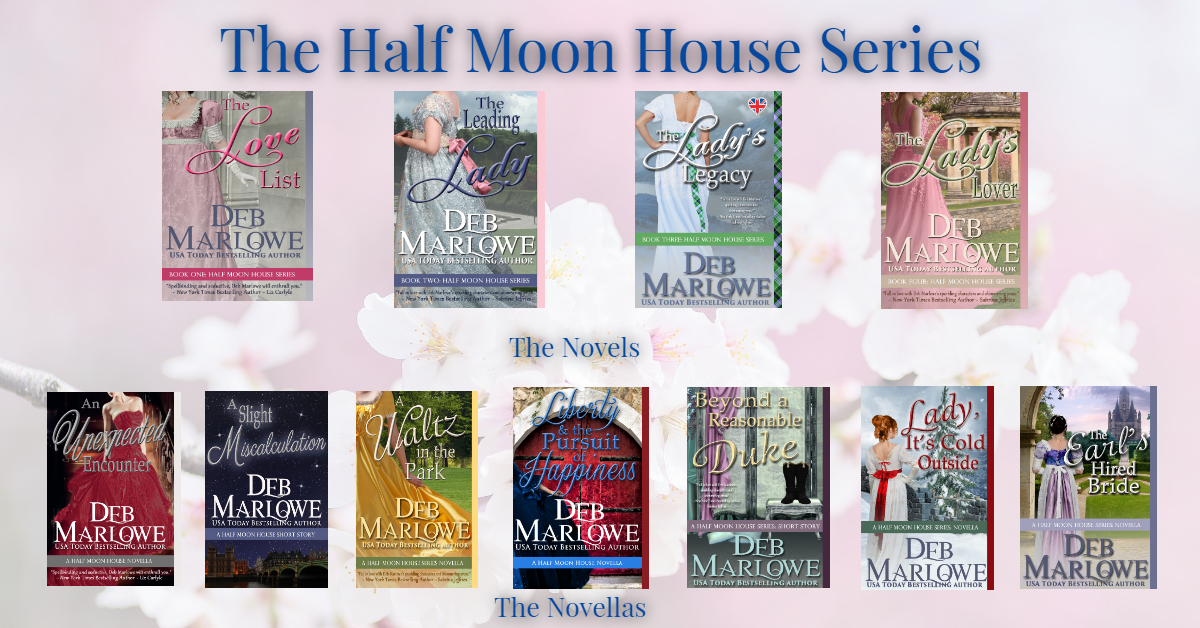