​Beguiled at the Wedding

Miss Penneck and the Pixie's Poem

Miss Penneck was sublimely content when she at last realized her dream of opening a bookstore—until a handsome printer shows up, claiming the shop space is his.

Suddenly, everything is complicated.  There’s a Pixie in her shop, her father is obsessed with the notion of her deceased mother returning to visit, and the handsome printer’s enemies have made her a target.

Her life is in a tangle, but a Pixie’s poem will show them all that love and connection are always the answer—and the best that life can give.

Excerpt:
Puff danced her fingers across the narrow, soft petals of a dandelion. She was a young Pixie, it was true, only a few decades old and new to her power. Still—dandelion duty? It was as low a rung on the assignment ladder as a Pixie could get—largely because dandelions were so hardy as to hardly need the support and caretaking that a Pixie could provide.

Still, she would do her duty. Dreamily, she let her power flow through her fingertips, feeling it move into the hollow stem and down into the roots, urging them to grow and spread and dig deeper into the soil.

Roots. The Pixies had roots here in Cornwall, and both they and the land benefitted from the bond. This part of the coast was beautiful, healthy and diverse in landscapes. The Pixies were thriving, a record number of them living together in their barrow and caring for the earth and its creatures.

She loved her Pixie family, but tradition had a tight hold on them. Their work was sacred, of course, and necessary, but were there not other things to discuss, other than the optimum number of pine cones for the year, the proliferation of sea pinks in the meadows and the never-ending bickering of the squirrel clans? Must they always dance the same dances under the bright moon? Sing the same songs at the solstices? Did none of them yearn for more? Wonder what lay beyond their borders? Long to see new plants, new creatures, new faces? Hear new music and stories?

Oh! She’d not been paying close enough attention. She’d given the bloom too much magic. It had stretched, curled in, and matured to seed while she’d been woolgathering. Oh, dear.

Sighing, she closed her eyes and summoned a wind.

She blew out a breath in despair. This was why she was on dandelion duty. This should come easily. Scrunching up her face, she tried again.

There. A breath of a wind. She reached for it, but it fell apart.

Again. She curled her fingers and tried again. Yes. A drift of a breeze. Concentrating fiercely, she steered it to lift and capture the fluffy dandelion seeds. Then she willed it upward, watching the seeds spiral high until they caught the wind coming in from the sea and scattered.

Sighing, she sank back. With luck, the seeds would find good soil and new homes, and neither her magic nor the plant’s efforts would be wasted.

She rested a moment, then rose into the air herself, high enough to gaze out toward the rhythmic pounding of the sea for several long moments. Longing flowed through her as sure as blood and magic.

But she resolutely turned away after a few moments of indulgence. Dandelions. They were her duty and her destiny right now—and she would see them thrive.

Thoughtfully, she turned her eye toward the sturdy stone walls rising in the distance. The gardeners at Castle Keyvnor were always rooting out dandelions. What better way to prove herself than to see them thrive there—despite the humans’ efforts to eradicate them?

Puff flitted her way to the castle grounds, pausing only to encourage a few specimens she found in a meadow and to scatter seeds along a creek bank. Reaching the castle gardens, she started at the outskirts, searching for spots the gardeners might miss at first glance—along the outer side of low garden walls, in corners and in crevices.

Coming over a wall into a garden spot closer to the castle proper, she was brought up short by an explosion of bright rose blossoms and a cloud of their heavy scent, perfuming the air. Something else gave her pause, too.

Voices? No, one voice.

She crept closer. A human woman spoke, not pausing for response, her tone rising and falling, her excitement clear.

Intrigued, Puff took shelter in a thick shrub rose and stared. The woman was pretty. She reclined in a nest of pillows and blankets, while a man lay with his head at her feet. She held something in her hand and addressed it, instead of him. After a moment, Puff realized she was telling a tale.

It was a thrilling account of a terrible storm at sea, a ship wreck, and the rescue of a young man. Puff forgot her dandelions as she was caught up in the story, tasting the salt air, hearing the roar of the storm, and feeling the pounding power of the waves. She thrilled to the adventure and sympathized with the young man’s yearning, after his recovery, to go back out into the world, back to sea.

Abruptly, the woman stopped. She tossed the object she held aside and spoke to the man, laughing softly.

Blinking, Puff realized she was not alone in her shrub. Tuft, the most ancient and powerful of the Pixies, perched on a branch nearby.

She gave him a tightly nervous, but respectful, nod. Stretching, he returned it.

“Why did she stop?” she asked, unable to hide her disappointment. “The story was not finished.”

“She’s reading it to him in installments,” he answered, his voice gravelly with age. “I come sometimes to listen when I am free.”

“Reading?” Puff did not know the word.

“It is one of the rare forms of human magic.” He gestured toward the blanket, and the object lying near the humans. “They place their feelings, their histories, their doings and their stories in those books. And then another human can come along and open it up and experience it as well.”

“Magic indeed.” Puff felt the yearning rise up in her again. “Why, I have been on a rousing adventure these last moments, and yet I never left the garden.”

Movement caught her attention and she saw the human man help the lady to her feet. She was great with child—another form of magic that Pixies did not possess.

Puff looked up at Tuft’s wizened face. “How do I learn this magic? This reading?”

He frowned. “I do not know. I am not sure it is even possible. No Pixie has such knowledge.”

But Puff wanted it—more fiercely than she’d ever wanted anything in her young life.

Tuft stretched and looked toward the forest. “I must go. The owls brought news of another troublesome leak near the quarries.”

He popped out and Puff, suppressing a bit of envy at such advanced magic, turned to watch the couple walk back to the castle, the book tucked under the man’s arm.
​
Reading. She must learn it. She would find a way.

A completely wonderful story with cameos from previous characters, Pixies, sweet kissing love scenes, a nasty villain and a wonderful HEA.
​          ---Flippin' Pages
How fun is this?  This is a vision of our Puff, created by graphic artist Rebekah Eggebeen.  Don't you love it? 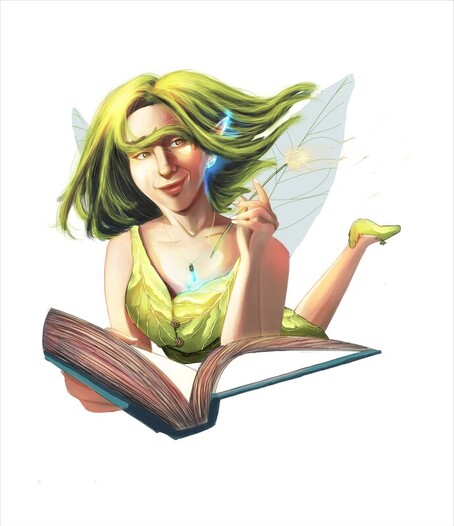 You can see more of her dynamic art at https://mysterewolf.wixsite.com/website
Don't miss all the new Castle Keyvnor Stories!