Giraffes?   In the Regency?

Yes!  At least, the stuffed version!  The first home of the British Museum was in Montague House, on Great Russell Street.  The staircase led to a landing where there were featured three stuffed giraffes and a rhinoceros.  I've always been so interested in the depictions of them, I had to use them!

In An Unexpected Encounter, our heroine Lisbeth meets a young girl, come to visit the giraffes--and her memories.  She also meets the girl's guardian, Lord Cotwell, and so begins a story that features laughter, tears, automatons, insect collectors, a tryst in Hyde Park and of course, the subtle matchmaking efforts of Hestia Wright! 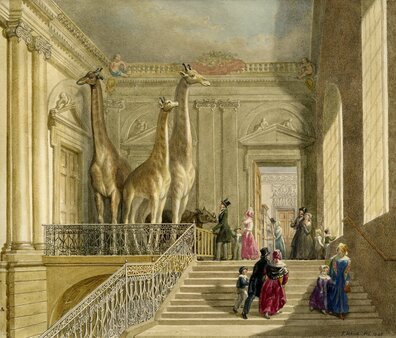