There are many wondrous aspects of Vauxhall to explore in a Regency!  (Now that I think about it, I may write an article about the place!)  One of the things that felt most magical to those in the Regency were the lights that filled the trees in the evening.  Honestly, such a thing feels special to us now!  The guests at Vauxhall would be strolling, visiting, dining or dancing and at dusk the lights would be lit.  It was utterly unique and awe-inspiring and created a fairy-tale atmosphere that enchanted.

Even more--the lights all came up quickly, nearly at the same time.  It was a feat of engineering back in that day to make it happen.  There was no switch to hit them all at once!  The number of lamps is debated.  The Picture of London in 1810 quoted a figure of fifteen thousand glass lamps, while the Microcosm Of London wrote of thirty-seven thousand colored lamps.  But they all agreed that the lamps came on very quickly--taking about two minutes for them all to be lit.  They did it be creating a system of linked fuses, lit with whale or seal oil.  Apparently, it occasionally gave the gardens a bit of a fishy smell!

Surprisingly, Charlotte and Whiddon do not go to Vauxhall in Why Do Earls Fall in Love, but an enterprising hostess hires the men who know the system to illuminate her garden party.  It is a beautiful surprise, of course, but for Whiddon and Charlotte, it has far-reaching and shocking effect!  I hope you'll enjoy the results! 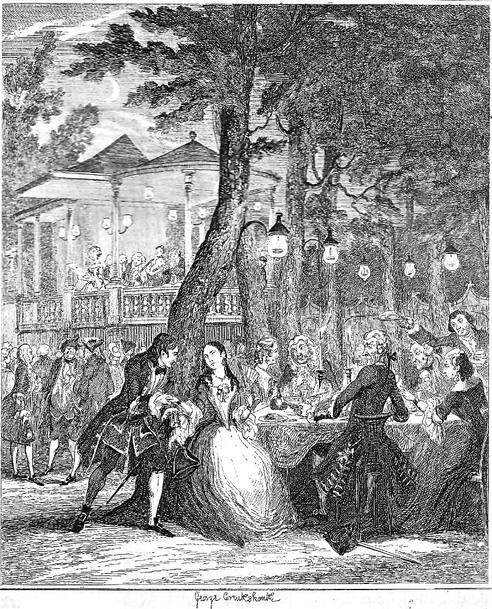 Cruikshank's The Supper at Vauxhall