“Yes.  No.”  She shrugged.  “I don’t know.”  She leaned forward over the forgotten remains of their dinner.  “Are you going to make me ask you again?”
His mouth twisted as if he were considering it.  He sat there silent long enough that she knew he was considering it.  Her heart sank.  He was likely considering how to get out of her cabin and locked safely behind the door to his.

“Hell, no,” he said at last.  He stood and extended an imperious hand.  “On your feet,” he said roughly.  “Your first kiss should not be on a hard, narrow ship’s bunk.”

She took his hand, let him pull her to her feet.  Relief sent shivers down her spine, so strong it banished any mortification she might have felt that he had read between the lines and arrived at that particularly embarrassing truth.  His fingertips left hers and dragged lightly up her arm, sending shivers through her.
He stepped closer.  “Just a taste?”

Her eyes slid closed as she nodded.  He continued, exploring her jaw, the corner of her mouth, her temple.  The shivering stopped—likely because she was growing so warm.  He cupped her jaw with one hand, slid the other over her hip and to the small of her back.  Pulling her tight against him, he pressed his lips to hers.

A kiss.  A simple thing, the soft touch of one mouth to another—and yet.  And yet she felt it, instantly everywhere, lighting her up from within, waking all the dormant parts of her, from the top of her head to the tip of her toes.

Gently, he instructed her.  Lightly, he brushed her with his mouth.  No rushing or insistence.  He was inviting her to come along with him.  Willingly, she followed him to a place where lush, rich and more were the only words that mattered.

Because the rest of her wished to go along with him, as well.  Her hands crept upward, enjoying the contrast of soft linen and hard, curving chest as her arm slipped around until she was—incredibly—closer.  She dug her fingers into those gloriously broad shoulders and finally reached up with one finger to softly touch that intriguing scar.  Her nipples went hard as they rubbed where her hands had just wandered.  When he reached down to her bottom and urged her tighter against him she gasped her surprise and approval.

He took the advantage and pressed his tongue to hers.  She’d known it was coming, and yet she tensed.  He slowed immediately, but did not retreat.  Instead he coaxed, played, tempted, until her objections were gone and nearly all of her breath with it.

He grew hungrier, asked for more.  The powerful beat of his heart twined with hers.

But this—he surrounded her, big and masculine and hard.  Demanding.  It was utterly impossible not to respond.

He moaned.  She could feel the rising wildness in him.  His mouth seared its way down to her throat and his hand crept up to cup her breast.  Her nipple rolled beneath the palm of his hand and all her muscles tightened against the incredible jolt of passion arcing suddenly through her.

He towered over her.  She should be wary of the complete control he held over the situation, over her body and its reactions.  Instead, she wanted more.

So dangerous, this feeling of being frantically wanted and desperately needed—and also safe, protected, cherished.  Free to desperately want in return.  This was her opium—she recognized it at once.  The heat and taste and smell of him shut down all rational thinking, stole her determination and will power, replaced it with a deep, aching need that settled low and deep in her churning belly.
​
It should have been a warning.  It wasn’t.  It wasn’t even deterrent enough to keep her from thrusting her breast further into his hand. 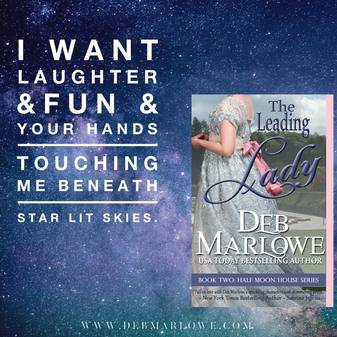 Very good read.  A page turner that I could not put down!
--A.C. Net galley reviewer

5 stars.  An enemies to lovers story that is just a lot of fun . . . the perfect series to start this summer.
--The Romance Librarian