A LIST NO RESPECTABLE LADY WISHES TO BE ON . . .

Somebody is reviving The Love List--that wickedly witty annual register of London's light skirts--and they've added Miss Brynne Wilmott's name to the list!  She's had a difficult enough time escaping her monster of a fiancé, facing the wrath of her father--she doesn't need to be labeled a prostitute on top of it all.  She'll do anything to stop the publication of the List.


THE REQUEST A CERTAIN DUKE HAS NO WISH TO HEAR . . .
​
The Duke of Aldmere doesn't believe in meddling. Fate has proved that interfering in personal matters only leads to bigger trouble. He has no wish to involve himself in Brynne Wilmott's affairs, despite her spirited beauty and damned tempting mouth. But she's discovered that his brother is mixed up in this List business as well. Reluctantly, they agree to work together to prevent the disastrous publication.


Their quest leads them through some of London's most dangerous haunts and it quickly becomes clear that Brynne's former betrothed is behind the plot--and that his plans are more twisted and treasonous than anyone has suspected. Yet the danger and intrique are as nothing compared to the effect than Nathan and Brynne have on each other . . . 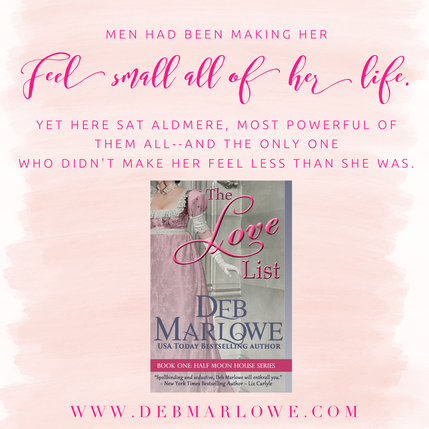 EXCERPT
She paused just before they reached the last door and looked up at him, her expression a stiff mix of defiance and pride.  ”It’s wonderful work that Hestia does here.  I’m proud to be a part of it, even for a short while.”  She glanced back the way they had come and then lifted her hand in a gesture that included all of the house and the people in it.
​     She met his gaze–and smiled.
He froze.
Backwards.  Inverted.  Inside Out.  He didn’t know this girl.  Their acquaintance was incredibly brief and even more outlandish.  The natural order of their knowledge of each other was completely offset.  He knew how she looked when she was terrified and furious, annoyed and protective.  What he did not know was the expression she wore when she was introduced to someone, how she looked when she was relaxed and happy.  This was it, the first time he’d experienced her in a more commonplace manner–and it came with a wash of feeling that utterly shocked him.
Transformative, that smile.  It lit her from within like a burgeoning flame, starting small but climbing higher, warming her features, blending them into a perfect, gut-wrenching harmony.
Even more amazing was the effect it had on him.
REVIEWS
What an exciting beginning to a new series. . . A must read for anyone who enjoys historical, Regency, romance with passion and an intriguing plot. I can hardly wait for the next installment of the ‘Half Moon House’ series.  Ms. Marlowe is a wonderful storyteller who pulls her readers into her stories and holds them there from beginning to end.  What an enjoyable read!
–April R.  My Book Addiction and More

​Engaging, intriguing, exciting and ever so difficult to put down.
--I am, Indeed, the Place to Find Your Next Read

I was glued to the pages and I've read it twice now.
​--  Kelly S, The Sassy Book Lover 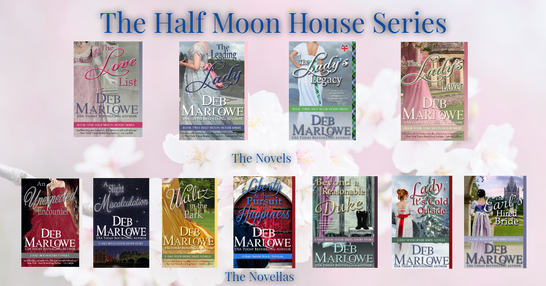