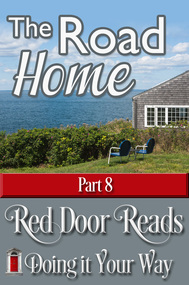 ​Anne pointedly ignored the large duffle thrown into a chair in the living room.  She was chopping veggies steadily at the kitchen table.  She felt proud of herself.  Her movements remained smooth and steady, even though the rest of her felt as off kilter as Grams’ terminally unbalanced washing machine.

Matt was just a couple of rooms away, in the shower.

Her mouth watered, and not for the red peppers under her knife.

She was possessed of a few notable talents.  Flawless knife skills.  A discerning palate.  A decent musical aptitude.

And a vivid imagination.

She jumped, looked up, and cursed that dream mist for fogging her brain, because the real Matt Chadwick, entering the room and giving her a glimpse of solid chest and sculpted abs, left her fantasies in the dust.

He stopped in the doorway.  “You started without me?”

She’d had to, hadn’t she?  When he’d up and left her here alone.  Pasting on a grin, she pushed old resentments aside.  Time to make new . . . what?  Memories?  Mistakes?  Just food, Anne.

“I only chopped some veggies,” she reassured him, running her knife over the last of the peppers.  “You can already do that, I assume?”

“Well, you don’t need mad knife skills like mine.  You just have to be able to wield a paring knife.  Come over here.  We’re going to start with breakfast—most important meal of the day!”  She flashed him a smile.  “I remember how much you like to have breakfast for dinner.”

He took the apron she handed him and pulled it on, covering the muscle-molding tee.  Damn.  Oops.  She meant, Good.

“You remember that?” he asked in a quiet voice.

Along with the feel of his hands on her, the soft brush of his lips in her first kiss . . .

“Yep.  Now, this is a recipe for hash.  It’s super easy and healthy too.  It makes a big batch and leftovers heat up nicely.  The hardest part is chopping everything.  I’ve already done the peppers—red and green—onions and mushrooms.  Here.”  She handed him a cutting board.  “You peel and dice the potatoes and I’ll handle the ham.”

They worked companionably for a while, as Anne showed him how to sauté and season the ingredients and add the eggs at the last.  He stood close at the stove and she could barely concentrate on the dish.  The scent of him mingled with the tantalizing cooking odors, settling in her chest and plucking at old, sore heartstrings.  Every bit of him felt dear and familiar—down to the cellular level.  Those blue eyes and broad shoulders and that not-often-heard laugh had imprinted on her core years ago—now she was realizing that she’d never wiped that slate clean.

She let him dish up their plates, while she fetched a tin.  “I brought some of my famous, light and flaky biscuits to go with it.  You won’t be up to tackling biscuit dough for a while.”

He took a bite and nodded in appreciation.  “Yeah, about that.  I’ve got one breakfast down, but what about the rest of the day?”

“Well, besides leftovers, there is half a ham steak left.  Simply warm it in a skillet and you’ll have enough for a couple of sandwiches.”  She waggled her brows at him.  “And if you play your cards right tonight, I’ll come back tomorrow to work on dinner.”

They ate in easy silence for a couple of minutes, before her built up nerves compelled her to fill it.  “So, what were you doing out there, today?”

Some of the openness in his gaze shuttered off.  “Cleaning up the graveyard.”

She sat a little straighter.  “You liked John and Heather’s idea, then?”

“If you’re not here?”  She eyed the duffle that had been a poke in her eye since she’d walked in.  He hadn’t even completely unpacked.

She decided to take the bull by the horns.  “So, do you have somewhere you need to be, Chadwick?”

“Got a job waiting for you?”

He shook his head.

She leaned in.  “Then why not stay here?”

“Matt.”  She waited for him to look her in the eye.  “What are you looking for?”

“And that’s not here?  Not for you?”  Disappointment stabbed deep.

He ran his hands through his hair and stopped with them at the back of his head.  “Listen, you were great, when I stayed here, making me feel welcome.  And Uncle Dan made sure I understood I was a Chadwick.  But the rest of Old Derby always let me know that I was an outsider.  I’m not like you, born and bred.”

“Working with Heather and John will go a long way to fixing that.  You’ll be contributing to the community, bringing in much-needed business . . .”

“Maybe.”  He shot her a challenging look.  “But why are you giving me a hard time?  Aren’t you leaving?  Culinary school?”

“Yeah.”  She stood and gathered up her dishes. “I guess I want to do what you’ve already done.  Go out and have my adventures.  Learn, do and taste new things.”

She turned around and leaned against the sink.  “I will, I hope.  And I’ll have a good time doing it.  But I know I’ll come back here, sometime.  Maybe open a little restaurant, bring the taste of the world back with me.”

He crossed over, reached past her to put his dishes in the sink, then stayed, intruding well into her personal space.  “What does the world taste like, Anne?”

The air between them hung heavy with old memories, new hope and good old-fashioned lust.  “You tell me.  You’ve been out there.”

“Dust.”  He groaned.  “The places I was sent tasted like sand and dust . . . and spice.”  He reached up to cradle her jaw.  “Nothing like the sweet taste of you.”  His thumb gently caressed her lower lip.

“I’m surprised you remember.”  He was close, so close and he fit as well as she remembered.

“Oh, I remember.  Sweet, so rich and full of promise.  I’ve dreamed of those kisses.”

She should stop this.  He’d hurt her once.  Broken her heart.  Was she really going to let him do it again?

“I was going to teach you to make French Toast,” she whispered, even as his fingers burrowed under her shirt.

“Touch me instead,” he urged, low.  “Do you want to know what else I’ve dreamed of?  Those violin calluses on your left hand.”  His eyes closed as her fingers drifted upward.  “Oh, how I’ve wanted to feel those on my skin again.”

He claimed her mouth then and she surrendered.  Let him in and met him kiss for kiss and thrust for thrust as their tongues danced.  Her nipples went hard and peaked against—the bulky sweater.  Damn Grams for being right.  Nothing was impeding the raging evidence of his desire, though.  It pressed long and hard against her abdomen.
Then his hands went seeking under the cable knit.  He reached her breasts, covered them, pinched a nipple and tangled his tongue with hers again.

She arched into his hand—and they both jumped as the old phone jangled on the wall right next to them.

They froze, lips touching, his hands over her breasts, one of hers on his ass and the other sprawled across his chest.

She pulled back.  “You’d better answer it.  It must be important.  Why else would someone call out here?”

He sighed and withdrew—and she ached for his touch to return.

He turned to face her after he’d answered, his expression serious.
​
“It’s Libby.  She says she’s fallen and she can’t get up.”
To read the next section of The Road Home, click Here to jump to Deborah Cooke's site!

The Road Home is a Round Robin story written by the authors of Red Door Reads as a special treat for our readers!  To start at the beginning of the story, click here to go www.RedDoorReads.com